This goes out to all of the people 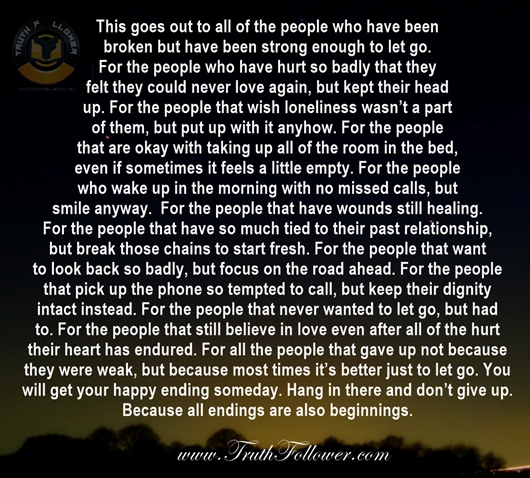 Move on. Stop wishing about “if only” things could have been different. It’s just a chapter in the past. But don’t close the book. Just turn the page for every day is a chance to make new beginnings, new hopes and new endings.
~Brigitte Nicole

I would rather be alone with dignity than in a relationship that requires me to sacrifice my self respect.
― Mandy Hale

I told you I’d move on. I told you I’d let you go someday. Honestly, it was the hardest thing I’ve ever done but it was worth it. For me, for my heart. You hurt me so bad. You killed my trust, you changed me. I knew I could be strong enough to let you go. I knew it and I did it. I can’t explain how proud I am. Because I’m the only one who knows how much you hurt me. But here I am now, healing. We may love the wrong person, cry for the wrong person, but one thing is sure, mistakes will help us find the right person someday.
By Truth Follower
Email ThisBlogThis!Share to TwitterShare to FacebookShare to Pinterest
Newer Post Older Post Home