Have respect for a woman

A man is born through a woman, and he is raised by a woman, and he falls in love with a woman, and he marries a woman. And I am surprised about the man, who doesn't respect a woman.
Woman must treat equally regardless of gender because we are all human beings. After all is said and DONE some of them, most of them think that we are beneath them. 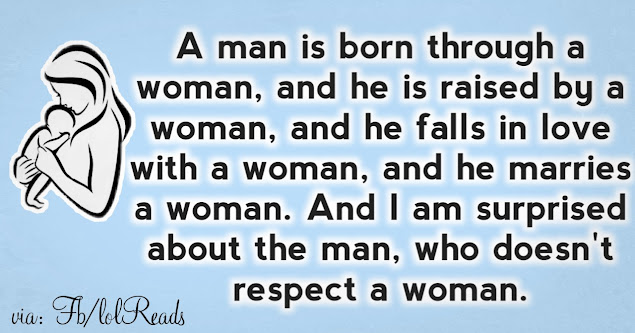 Truely said.. It's often a Paradox that most Men do not often consider the women he often associates with as equals and do not give them due Regards and Respect in the Society.
Some men just disrespectful they never respect their mother so they wont have no respect for a woman or their wife. Sad world.

A man that don't respect a women is not a man, he's a lowest level of a man, women are to be loved by a man, this is how the world going to keep going for many more Years.

Man and woman are two sides of same coin so give respect and get respected.

A man who realizes that that his wife is his mother,his sister etc must love and respect as well as adore her.
By Truth Follower
Email ThisBlogThis!Share to TwitterShare to FacebookShare to Pinterest
Labels: Relationship, Respect, Woman
Newer Post Older Post Home