The truth always comes out eventually

Building up their low self esteem by down grading someone else is a sad way to live. Hope it hurts their conscience!
Judge a person, not by what others say about them, but what they say about others.
So true. Funny thing they know the truth but turn their face because family don't want to admit it that their son or daughter even nieces and nephews are the same as them!

It's the way of today's world!! But trust me don't fire back! They always eventually expose themselves for the insecure jealous individuals they really are, and those that believe one side of a story, are best exposed to you as well for they are not good friend material, AND finally for those that actually know the truth yet choose to keep their mouths shut and follow the " lies" are also best forgotten!!

It's happening all around us. These people need to get a life and find some kind of happiness. They lack self respect and self love. 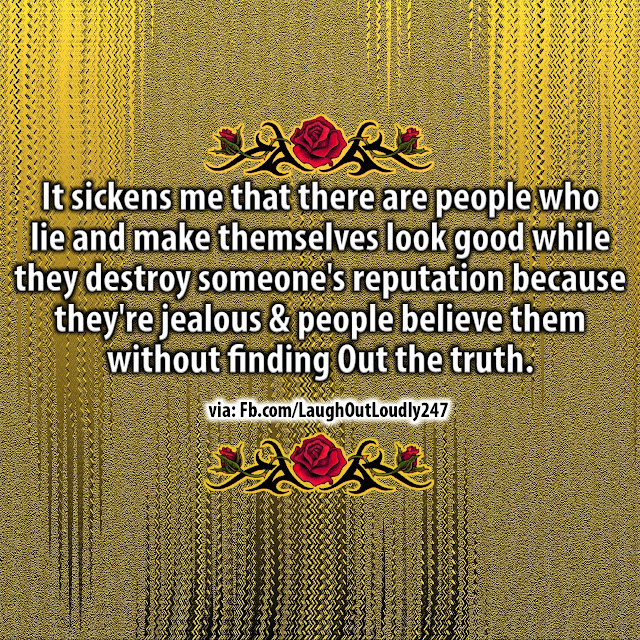 That is TRUE, I  don't worry about that anymore. Karma is something!

it's hurtful, but gods gonna get you for your bad deeds. I don’t hang out with them kind of people, praise the Lord..
They could only lie for so long before the truth is revealed. Don’t socialize yourself with that kind or if you do don’t give them much to talk about you.

l will always go to the person who is spreading these lies, face to face, and they don't know what to say then.

Know your own self and value, and most of love yourself. The rest will fall into place. The lies that people tell for self promotion to boost up themselves up let them have it.
By Truth Follower
Email ThisBlogThis!Share to TwitterShare to FacebookShare to Pinterest
Labels: Lessons, Truth
Newer Post Older Post Home