A real relationship has fights. Has trust. Has faith. Has tears. Has hurt. Has sweet smiles. Has genuine laughter. Has snorts because of the laughter. Has weird, stupid, unnecessary arguments. Has patience. Has communication. Has secrets. Has jealousy. And most importantly, love. This is all just a mess that turns out... beautiful&an experience that can never be forgotten. - Unknown 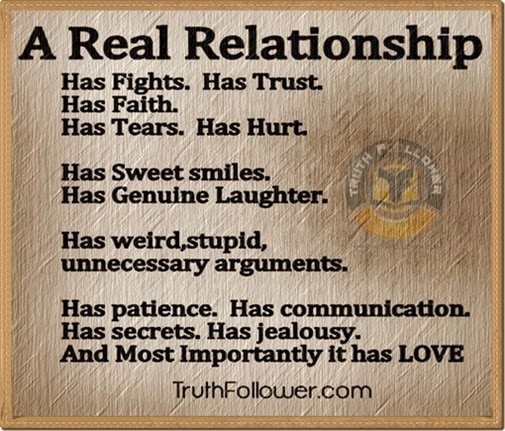 I used to want a relationship with no strings attached, but then I realized the strings are what holds a real relationship together. [Author ~ Unknown]

A real man gives his lady the attention she deserves, gives her all of his love, calls her beautiful, and treats her like a queen. [Writer ~ Unknown]

If you were going to die soon and had only one phone call you could make, who would you call and what would you say? And why are you waiting?  [Saying By: Stephen Levine]

I had a boyfriend who told me I’d never succeed, never be nominated for a Grammy, never have a hit song, and that he hoped I’d fail. I said to him, ‘Someday, when we’re not together, you won’t be able to order a cup of coffee at the fucking deli without hearing or seeing me.
[Written By: Lady Gaga]