We Learn to Respect Each Other 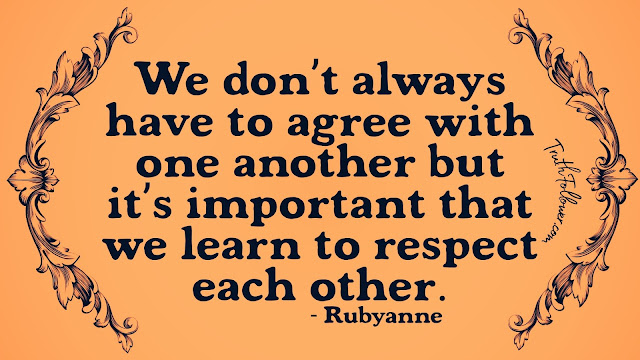 We don’t always have to agree with one another but it’s important that we learn to respect each other. - Rubyanne
Respect is so important!  Parents need to take this to heart, and teach their children respect.  We don't have to agree, but we should be able to respect another's opinion, whether we agree or not.  There was a time when we could discuss and we didn't always agree and that was okay.  Sometimes we learned something new from that person we didn't necessarily agree with.
First you have to respect yourself then When you give respect, you get respect.
Respect is so important but sadly some dont know the meaning of respect.
Respect used to be a normal thing for people toward one another back in the day..
Not much of that going around lately. People have become very mean in some cases.
Respect has gone out the window. People don’t even respect themselves. If they did, they wouldn’t act the way they do. 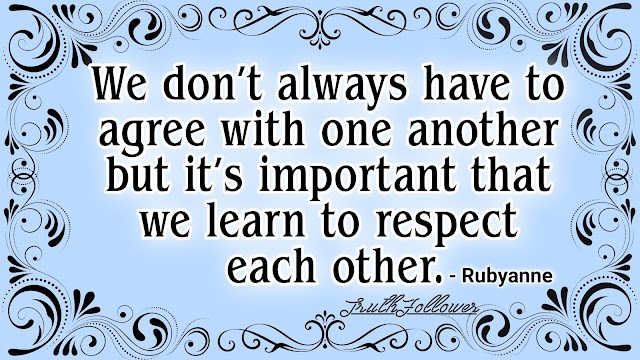 It's a two-way Highway, but if they show no respect, don't lower yourself to their level.
Respect is something you earn, not something you get just because you want it!   If you don’t respect yourself you can’t respect anyone else!
World would be such a Better place. It takes very little effort to show respect and Love and just for the Fun of it.

I can’t necessarily have respect for people with certain beliefs. But I still will always treat them respectfully and with dignity, value, and kindness.

We don’t have to like each other, have the same beliefs, have the same lifestyle, religion, colour of our skin....but we should all respect each other....
By Truth Follower
Email ThisBlogThis!Share to TwitterShare to FacebookShare to Pinterest
Labels: Manners, Respect
Newer Post Older Post Home