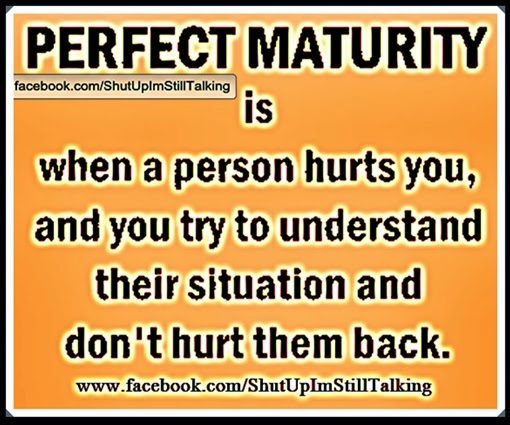 Maturity is the ability to reap without apology and not complain when things don't go well.
[Quotes by: Jim Rohn]

Maturity is often more absurd than youth and very frequently is most unjust to youth.
[Quotes by: Thomas A. Edison]

Maturity is a bitter disappointment for which no remedy exists, unless laughter could be said to remedy anything.
[Quotes by: Kurt Vonnegut]

Clouds come floating into my life, no longer to carry rain or usher storm, but to add color to my sunset sky.
[Quotes by: Rabindranath Tagore, Stray Birds ]

You are never too old to become younger!
[Quotes by: Mae West]

Perfect maturity is when a person hurts you, and you try to understand their situation and don’t hurt them back.

A mature person is one who is does not think only in absolutes, who is able to be objective even when deeply stirred emotionally, who has learned that there is both good and bad in all people and all things, and who walks humbly and deals charitably
[Quotes by: Eleanor Roosevelt]

DISTANCE shouldn't matter because at the end of the day, we're all under the same sky....
By Truth Follower
Email ThisBlogThis!Share to TwitterShare to FacebookShare to Pinterest
Newer Post Older Post Home