Don't take people for granted. No matter how much they love you, people get tired eventually. We are all given chances, but you never know when the last chance may be. 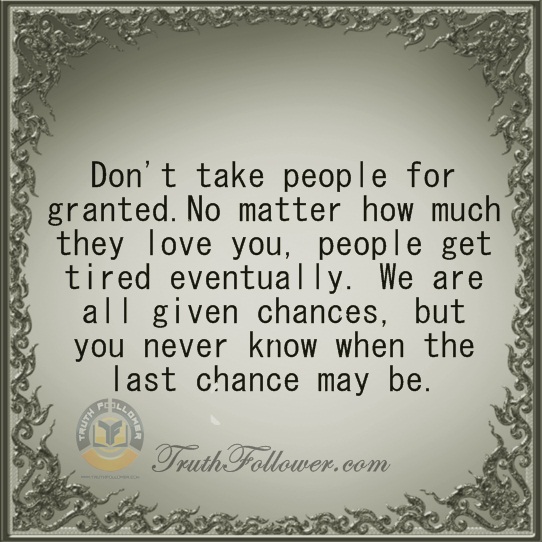 I was also taken for granted, Happened so many times, Was hard to let go, But today,Im happier, No more walking on egg shells! That's so true. I used to love someone so much but he took advantage of that, making me feel unworthy of his love. Like a shock, it marvels me today how it became opposite...what I felt disappeared as I got tired of being disrespected and unloved by him. How I stopped caring still makes me wonder up till date coz I always cared for him then. Now he seeks what he once took for granted but I don't ve d strength to grant him such favour again. No grace for him on me love again. I learned to live life without him and move forward...

I Have finally stopped loving some people because they never understood my feelings! It feels better to let go! Some people are just not worth it!

Don't take the loved ones for granted. We are all given chances, but you never know when the last chance may be. Don't take anything for granted or life for granted you have no idea what you have until its gone. Cherish life your freinds and family. Once there gone you have nothing.. GOD BLESS"
By Truth Follower
Email ThisBlogThis!Share to TwitterShare to FacebookShare to Pinterest
Labels: Encouragement, Taken For Granted
Newer Post Older Post Home